5. Zombie bites don’t have to turn you.

You know, they just don’t. If the zombie has something in his/her saliva that reacts to a person’s body, then why wouldn’t there a few people who don’t get the full effects of whatever it is a zombie is carrying. Not everyone can avoid the dreaded zombie bite—but that doesn’t mean they can’t survive it.

4. Judges that wear wigs are the best kind of judges.

Especially if it’s one of those old-timey white wigs. Those are the best. (Do UK judges still wear those? If so, they rock.)

3. Just because someone starts making out with a guy after he gives her money, doesn’t mean she’s a hooker.

You know how that is, right? You’re hanging out with a friend (who you think is a prostitute), and guy comes up and slips her a few bills. She takes the money, and they start to go at it on the street. DON’T insinuate that’s what she does for a living. You might just be wrong.

I never jumped on the #TeamJacob/#TeamEdward thing. (Probably because I never read Twilight.) So I never understood the need for people to “pick a side” when it came to two characters. Why can’t you just love each of them for them?
But alas, I have succumbed to the phenomenon of team picking. It seems to be a human nature kind of thing, too. As though I don’t really have a choice in the matter. I have to pick one or the other . . .
. . .
Okay, fine—
#TeamTommy
Who agrees with me!

1. However weak and frail a body may be, the spirit inside can give someone an immense amount of strength and determination.

These days, there are more and more strong female characters in books, movies, and television. Females that are brave, intelligent, beautiful, strong, and hold tight to their convictions.

Some characters, though, don’t always get to have that spotlighted voice in stories. The character who has trouble getting out of bed in the morning, who has lost all her hair, whose only clothes consists of a grey smock. The character whose offerings come more from within.

Liza, Gods of Anthem’s narrator and main character, leads a life of illness. Sick, bald, and fragile, she keeps her mind strong as she navigates a hellish world of zombies and apocalypse. Through destruction and captivity, her capabilities grow because she doesn’t give up—because she fights with everything she has.

Liza is the kind of character most people have not seen before. But they need to.

(Thank you so much Keely *sniff sniff*) 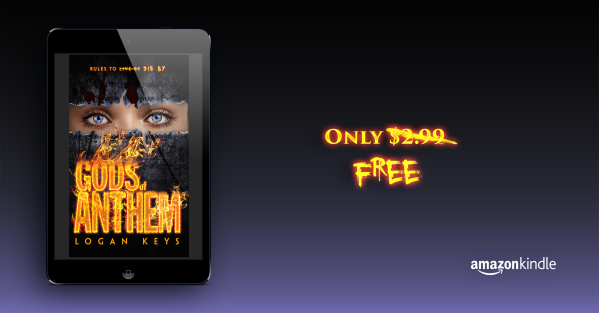