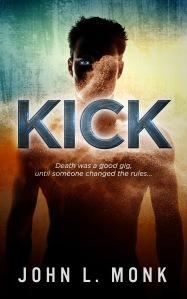 “Right now “Kick” has 65 reviews on Amazon, and a 4.7 star rating out of 5. When I first published, I’d hoped people would like the book, but I never expected the reaction I’ve gotten. I had a top 500 Hall of Fame Vine Voice reviewer say it was “one of the more entertaining and unique books” he’d read that year. Another Vine Voice reviewer also gave me a great review, and multiple reviewers made statements requesting a sequel. Over on Goodreads, I have a 4.3 rating (43 ratings/16 reviews), which is pretty good for Goodreads. I’m hugely flattered.” John L. Monk

I know I’ve whetted your appetite for this for far too long! Here it is folks,
John L. Monk rocks the house with our very first Loganesque interview.

So John, are you as stoked about this interview as I am?

I’ll take that as a WAHOO!

I know you want to talk about your book Kick and we’ll get to that in a minute, but first relax man, have a seat, a drink, and tell us a little about your real life self. What cooks your noodle? Aka, what do like to do for fun, maybe tell us if you live in any special place, treehouse…what have you.

John: If I had to describe my hypothetical perfect day, it’d be coffee at 8:30am, reading 10 or so 5 star reviews on Amazon, going “wow” at the 300 or so purchases since last night, then opening my email to find notes from my author friends asking me “what’s your secret?!” Then I’d sit down and do some writing—and it’d all flow out of me like water! My wife would make me breakfast at some point (in a perfect world…), she’d feed the dogs, she’d walk the dogs, she’d yell into the room at some point, “hey you got 10 more 5 star reviews!” to which I’d reply, “Uh, yeah…kinda late, huh? Pssht…” Around Noon-thirty I’d take a nap, then wake up for more coffee and a few more emails, then I’d write some more, then play some video games, then maybe grill something outside. In other words, everything I do on Saturday, minus the reviews, sales, wife-made breakfast, and Noon-thirty nap. Man I’m boring, huh?

So what you are saying is that you want my life? *blinks*

We love your book Kick! But let me ask you a bit about your writing process. Yes, we want to know all about that too because lots of writers out there are just starting this gig and need to know what it takes. So, give us some info about how you come up with your ideas.

John: I get my best ideas usually right before I fall asleep. Then I have to get up, go downstairs and write them down or I absolutely will forget them. When I’m writing, I don’t normally get new ideas about plot changes. I just write out the events of the story as best I can (it’s usually awful), and occasionally I have little flashes of creativity that turn “awful” into “possibly fixable.” Generally, I re-read my chapters as a way of kick-starting my daily writing session, and I tweak it a little here and there, shape it. When I’m done with the first draft of the entire manuscript, I re-read it about 50000 times and cut/chop it into something hopefully better. My general philosophy is that every scene has to be interesting. If it’s not, I either fix it or nix it.

Kick-starting…? Get it? Had to point out that little pun to our readers…with a blow horn.

How do you get pumped for writing?

John: I’m very rarely pumped for writing. When I am, it’s usually after a really good movie or TV show like “Justified” where the writing is simply incredible. Good books do the same thing, but obviously they’re more of a time sink (and yet, you must dedicate time to reading good books if you want to succeed). I’m usually pumped when I first start something—the words come flying out of me. This is one of the reasons why some people have described “Kick” as episodic. It’s basically three consecutive “adventures” by the same character. Very easy to write because I got to write “something new” each time.

That’s actually quite a neat idea! An episodic market maybe?

Editing. What are a few must do’s for a writer in this portion of the craft?

John: I’m currently reading a book called “It was the best of sentences, it was the worst of sentences” by June Casagrande. It’s dense, meticulous reading, but it’s absolutely brilliant. Before that, I read “How not to write a novel” by Howard Mittelmark and Sandra Newman. Before that, it was another book on grammar that Stephen King recommended. Before that it was a book on self-editing. I have a bunch of links on my blog to various sites that talk about editing. Whatever a writer can do to make sure their work is perfectly polished, they should. Can we break the rules? Sure, but it’s good to know the rules so that any breaking is our idea. Before I submit the sequel to “Kick” for professional editing (a must), I will re-read Casagrande’s book again, just to shore up my basics.

I think you summed that up quite nicely.

Okay, Kick it is! Go: (tell us about your awesome book!)

John: Kick is a vigilante story with a supernatural twist. It’s about Dan, a guy who commits suicide in college, who’s able to come back into the world of the living by possessing the bodies of bad people. He pops up in their body, in full control, and basically lives his life the way he pleases. He eats at restaurants, reads novels, goes to the movies, goes fishing, and when he’s not too busy, he helps people in need. After about 3 weeks, he’ll start to get kicked (kind of like a sneeze, without the tissues). Before he’s kicked completely out of the body, he makes sure his “ride” can’t hurt anyone. It’s a little like Dexter meets Quantum Leap.

If your book had a broadcast alert how would it finish? Beeeeeeep, beeeeep, beeeep, warning this book:

John: This book will make you hungry. I’m actually not kidding. The main character doesn’t have any friends, so he tends to focus on food for enjoyment. People always say, “enjoy the little things.” But for Dan, all he has is the little things.

Any R rated parts of your book?

John: There’s bad language, but mostly by others, and not the main character. There’s gruesome murder and sexually suggestive (and dark) material, but nothing explicitly X-rated. I’m not into the “blow by blow” analysis, if you follow me…

Got it. Your answer is nearly R rated for my blog…if you follow me.

When I googled your book, it did come up first. However, there was another similar named book below it. Tell me, have you contacted them and asked them to change it?

John: Nope. There’s a book called “Kick” about a soccer player. That’s two different kinds of Kicks, which is allowed under the Geneva Convention. If it becomes an issue one day, I’ll deal with it then.

Let us know when you do! I have a new video camera.

What’s next? Besides being poised for stardom, I’d love to know what else we should expect to come our way.

John: Sometime in October I’ll be published in an anthology called “For Whom The Bell Trolls”. Other than that, I’m working on a sequel to “Kick”. I’m trying to limit any short story writing and/or excessive blogging until I’m done with the first draft, because it’s easy to get sidetracked.

John: It’s funny, I had a blog post that talked about that. I wanted to call my fans “Lava Demons” but everyone thought “Monkeys” made more sense. I still like Lava Demons…just saying.

Where is your blog?
http://john-l-monk.com

Where can we buy your book?
http://amzn.com/B00DSPPTA0

Where can we show up unexpectedly with our luggage?

John: The airport! Hah, wasn’t that a clever answer? That’s the kind of clever you can expect if you buy my book. Except in my book, everything is even more clever. But to answer your question (less cleverly): I live in Virginia.

I think you monkeys know how to do your own stalking so…now you have a reference and state!

Thanks again, John! I know I enjoyed having you and wish you luck. Let us know when the second one comes out so we can question you again, even harder 😉


So that’s all, people. Check out John’s book and stay tuned as I hunt (cough) search out my next author to put on my trophy wall!

16 thoughts on “‘KICK’ back and relax in my fabulous interview session with John L. Monk!”