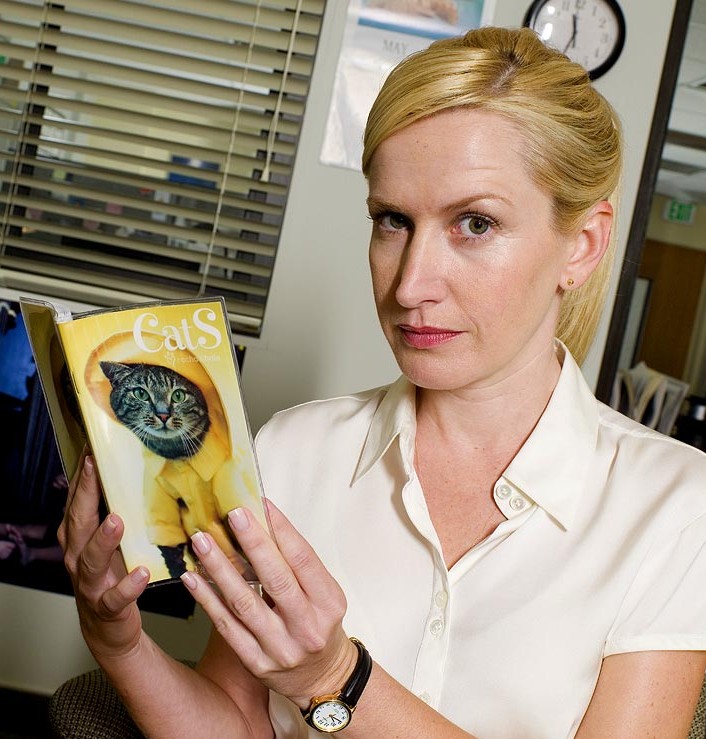 “You may ask me out to dinner. Nothing fancy or foreign. No bars. No patios. No vegetables. And no seafood.” Angela (The Office)

Since I’m on hold with my editor having “missed my opening” by a mile (I think our original date was August…of last year) (I wish I was kidding) I’ve been skimming some of the other time wasting— (cough) ummm that is, avenues for inspiration!

A little dandy caught my eye about going off into woods or some sort of nonsense and focusing on your writing with workshops and blah blah blah, pay here, yes right here, click it!

I picture this and not in a good way:

On this retreat…we have to run for our lives.

Is it sad that to me ‘writing retreat’ is an oxymoron?

Like saying “work retreat” where I am retreating, yes, but not from work, no, so what then do I retreat from…

I’m pretty much an outdoorsy-ish person, but with limited exposure. Imagine if you will a sort of out-door Cinderella flitting about in the woods, but at the stroke of midnight no freaky glass slipper wearer worth her salt is piling into the local tent Blair Witch style to pretend she’s sleeping well on the lumpy mis-shapen earth. Sleep number setting…? Hard as hell!

There’s just no excuse for brushing our teeth without batteries, just none.

I know what you’re thinking. She seems to forget the most commonly known writer-vacay is a cabin which has a bed.

Well Mr. Smarty pants what you seem to forget is that my OWN writer-vacay is a jet ski and a hotel room with air conditioning…away from other writers…or anyone who tries to speak at length beyond “I just had ANOTHER glass of that pink stuff and I can’t feel my face!”

Seriously, who can’t think up an awesome plot on a jetski?

It’s not my fault. This invite to pack me away with twelve other failures (cough), hey I said OTHER meaning I’m one too—to listen to a lady or gent with some sort of experience (vague in the flyer) come up with euphemisms for “Your book sucked and now you need other humans to tell you it didn’t, preferably ones who don’t know you very well or who charge a fee.” OR “You have never finished a book, and probably won’t ever finish a book. Ever. But here you are and your check didn’t bounce so Namaste.”

What? I’m sorry Cupcake if I’m ruining your inspirational blog hopping but let’s get real. If my book just sold for half a mil I’m pretty sure I don’t immediately sign up for a “writers retreat” in Idaho. I’m certain that I’ve just blown a tenth of it on the craps table since I’ve never played and another 5th on the hotel room in Vegas. Or let’s say I’m feeling cultural I’ve been traveling…the world, like the whole wide one.

If none of those things have happened yet and you can’t find me see my para about the Jetski.

When I first started writing I pictured myself pulling mind blowing prose from my lyrical cesspool , something cryptic and enticing, alive and gripping filling my readers with so much awe that even peanut butter couldn’t keep their mouths closed.

While I hold out hope that this may still happen before I die. Or after. Probably after. I’ve given up the idea that this happens when you most want it to, or train it to, or better yet attempt to whip it into submission via “writing retreat”. It just doesn’t allow you to force it.

Since we all know that a grammatical masterpiece is not going to be my end game, as for the life of me the English language in all it’s glory seemingly puts me into a stupor if held up to any reasonable standard… I do have some grammar books I’ve decided to again extend my education toward but truth be known it’s the voice that comes to me in a scheming ungrammatical sense that throws everything off.

It speaks to me like gutter-tripe that ate a thesaurus and burbs out fragmented sentences.

It’s almost impossible to keep up with the dialogue that argues and yells and screams through my brain like twelve angry men only there are women too and do you know how fast some of us talk?

Then he/she (my voice is multi-gender thank you very much) slaps my editor across the face with a pair of gloves and demands a duel.

My editor (very much a she and not to be trifled with) immediately screams, “On guard you scallywag!” or whatever genre I’ve currently started writing in my NEXT midlife growth spurt (we don’t say crisis round here y’all) and they fight while I, the wilting flower, maiden of perfect figure and character, all in white, covers my bosom, watching in horror, terror, feeling faint, to await my champion to kiss, or hug, or pay, depending on who wins which most usually means, “Get your check book out you dead beat and pay your wonderful editor.”

Fact is, that writing for me is perilously close to hard labor at times (whenever rewriting or edits which is about 90 percent of it for me) and a retreat to try and be “artsy” sounds as lovely as a dentist appointment.

“But Logan if you go with an open mind you might be inspired to write the next classic!”

Well arn’t you just as magestic as a unicorn?

I might also be inspired to buy stock in bug spray. Did you ever think of that?

When I take a break or a retreat I let it all hang out…bosom notwithstanding. You wanna see that? Didn’t think so.

I swear by the end of your vacation (yours not mine cause this is least likely to be a vacation for me) you’ll all sit around and vote me off the island but instead of a helicopter that waits to take me back to my blessed bath to soak I’ll have given you all a story all right, one for the front of the New York Times: “Girl lost in woods during writing retreat. She was never really that good anyway…”

Where even the journalist cant for the life of him understand why we’d need a retreat. Because HE writes for the freaking New York Times!

11 thoughts on ““Girl lost in woods during writing retreat. She was never really that good anyway…””